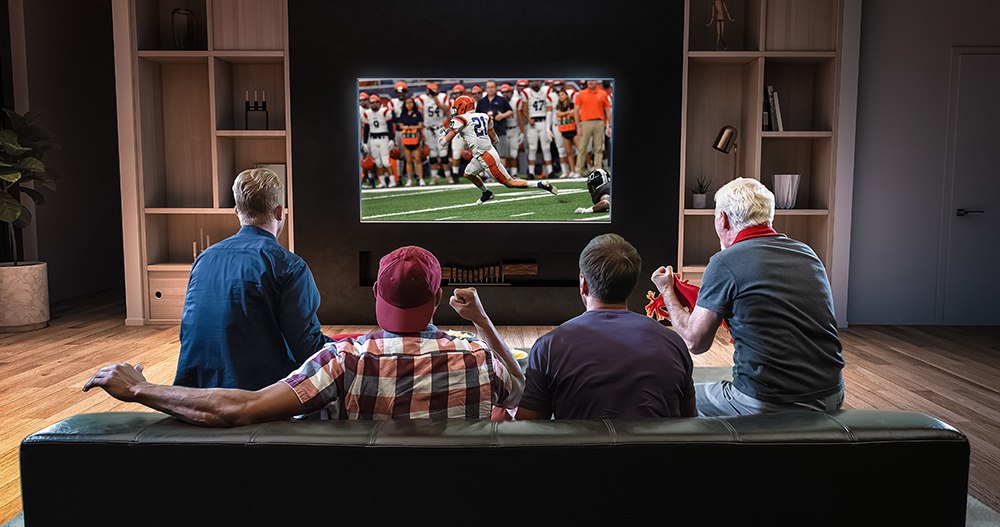 4K for Sports: Getting the Big Game in UHD HDR

Today’s UHD HDR technology is maturing. However, even with dozens of cameras and specialty slow-motion equipment, we’re not yet able to film an entire game in 4K. To provide an entire game in UHD HDR today, you need to upscale from the initial shot format. The video for this year’s American football championship final was produced in 1080p60 and upconverted to 2160p60. The signal was produced in HLG and then sent in different HDR formats:

If we consider that there is 35% market penetration of UHD TV sets in general, and then divide that percentage with the percentage of consumers that don't have the proper set-top-box (equaling about 80%). Then we estimate that about 28% of total viewers were watching in UHD.  If we're right, then that would make this event the largest UHD streaming event to date, with about 900K simultaneous sessions.

To give you an idea of the scale, the previous record was set during the 2018 world soccer championships on the BBC network. They cited 50K UHD HDR sessions. The American National Football League’s final 2020 game had 20x more viewers watching in UHD. That's a major step up.

The big impact on the viewing experience

The overall broadcast quality perceived was considered good. However, the OTT quality varied depending on the type of access network people were using. In general, and not surprisingly, viewers found more color issues in OTT streams than in broadcast. On OTT, the bitrate was fluctuating. In some cases, viewers were actually watching the native resolution in HD. Experts were expecting to see some defects and artifacts and members of the Ultra HD Forum observed that some compression artifacts were visible, at least in some scenes. And they also occasionally noticed a slight lack of resolution and some HDR artifacts.

Why were there issues detected? Some of the cameras used to shoot the game only support SDR. Also, the game was initially shot in 1080p, which means they had to up-convert to UHD.

Low delay for OTT has caught up to the traditional broadcast performance. And it’s thanks to DASH CMAF LLC. It will also soon be possible to use HLS thanks to the upcoming release of the Apple specification that Harmonic demonstrated at IBC’19. It can be difficult to provide an accurate measure of delay since it depends on your measurement method. When measuring data from different CDNs used to deliver the video for the Big Game, the delay, compared to traditional broadcast, was averaging between 15 and 20 seconds. That is a huge improvement compared to the 30-90 second delays measured last year for the same event.

Overall, the 4K UHD delivery (provided by FOX) proved that it is possible to deliver premium content with the same level of quality regardless of the delivery channel: pay-TV, broadcast, or OTT.

The Big Game highlights on resolution and audio

On the resolution side, it would be nice to see the game in 210p60 formats. Although it seems that 1080p60 is more suitable for sports, at least according to FOX. Then there is the audio aspect. It could have been an option to consider using NGA audio for the game. NGA audio is already deployed in Europe by companies like SKY UK, BT, and Canal+ for sports.

The HDR streams seemed to be under control across all devices, and it’s possible that moving forward, we see the usage of dynamic metadata like described in the Ultra HD Forum Guidelines.

The games to come and the future of UHD

The 2020 Big Game was a major milestone for the video industry. But this is just the beginning. The sports world is setting the stage for the next level of high-resolution video delivery. The 2020 euro soccer championship and the Tokyo 2020 Olympics will both be produced in 2160p/HDR/NGA. And going even further, NHK will take production up to 8K for the Tokyo Games as well.

But the UHD HDR promise is not only for the big events. Even standard events can be produced in UHD HDR with a simple SaaS approach. The SaaS model is in many cases ideal for sports content, with the flexibility to create a channel for a single event or game. In the cloud, you can easily scale in real-time to manage viewing peaks, and then simply stop the service at the season break or at the end of the event. More of these deployments are being rolled out worldwide and that trend is likely to continue.

Do you have questions about providing UHD HDR services? Let us know how we can help!