OTT video consumption is rising rapidly. To effectively manage bandwidth congestion, some popular streaming services are reducing their bitrate by 25%. Here, we’ll help shed light on why and also give some guidance on what can be done in both the short and mid-term to cope.

The facts on the bandwidth consumption

Netflix and YouTube have announced how they’re handling bitrate during this unprecedented time. But before we dive deeper into what each of those content providers is doing, let’s look at the current state of internet bandwidth, according to the report published by Sandvine in September 2019. The figure below shows the percentage of internet bandwidth that each of the most popular video streaming services consumes. 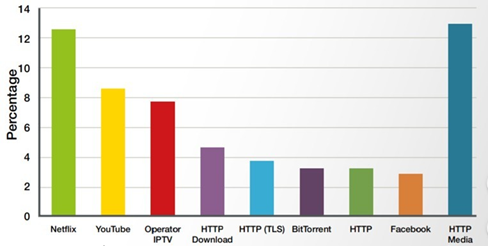 The Netflix approach to bandwidth constraints

Netflix has decided to reduce both the bitrate and the resolution simultaneously. The table below shows some measurements from Netflix content as an example.

When Netflix lowers the bitrate from 12 Mbps to 6.3 Mbps, then the bandwidth reduction is at around 47%, which will have an impact on the video quality. Note that in a VOD scenario, we cannot re-encode the entire library. At best, it is possible to re-encode the most popular titles, while for live, it’s just a matter of changing the profiles of the encoder at run time.

The real difference in quality may also depend on the internet service provider (ISP). With one ISP in the United Kingdom, we observed either 2160p (at 15 Mbps) or 1440p (at 7.5 Mbps), which corresponds to a gap of 50% using a top profile. That’s a substantial decrease in the quality of the video experience. However, that’s just one case. If we take, for example, an ISP with Open Connect, that ISP could likely get more bandwidth since the cache is already located in the ISP network. More research is needed to know for sure.

YouTube is implementing a different strategy. YouTube is only sending SD to the player, and unless users manually change the setting in their player, they will only view the content in SD. This is very much aligned with a demuxed 2018 presentation of YouTube. In a blind test, sending 408p to all users went unnoticed by most users. Only a small percentage of the users manually changed to higher resolutions.

The available options to reduce bitrate and optimize

Streaming service providers are reducing the bitrate of their services in a more cut and dry way than ever before. So, what tools are they using today, and are they still enough? First, there is ABR, which is designed to help reduce the visual quality gradually (typically by 25%).

Then there is the encoding. Netflix and YouTube are already using the file-based content-aware encoding (CAE). CAE is the most optimized approach. Both Netflix and YouTube are already using the known solutions to handle bitrate reduction with the smallest possible impact on video quality. If you are a streaming company and do not have a CAE solution currently implemented, then now is the time to consider one.

So what else can service providers do with the current tools and options available? Perhaps something can be achieved at the codec level? Today, many are still using AVC, and HEVC. AVC is a 17-year-old codec. And OTT providers only use HEVC for UHD and for mobile. Is now the time to consider moving on to a different codec? Some are considering AV1. But AV1 is only deployed for Android devices by Netflix, which is a very marginal portion of the traffic. One of the main reasons providers are reconsidering HEVC is the HEVC licensing.

The midterm solution for bandwidth congestion

Due to the licensing context of HEVC, AV1 has started becoming a popular workaround for HEVC replacement that’s royalty-free. Harmonic has demonstrated a live AV1 implementation at the 2019 NAB Show and presented interoperability with Broadcom set-top boxes. The demonstration showed how service providers can deliver the same video quality in AV1 with the same bitrates as HEVC. Sisvel announced a patent pool for the use of AV1, which may drive a shift away from HEVC. This especially might happen if there are no more streaming fees, at least for MPEG LA, or HEVC Advance, which was announced at the MC-IF conference in September 2019. However, nothing has been officially confirmed from VELOS. If this comes to fruition, that would make HEVC available for more than 2 billion devices and provide an even further 50% bitrate reduction.
Using CAE with HEVC will reduce the traffic by 64% versus a reference AVC CBR traffic. And it will offer a 40% reduction versus the CAE AVC used by streaming service providers.

For live and VOD content, the good news is that CAE can be seamlessly activated, as demonstrated by Harmonic’s EyeQ deployments presented in this webinar. The catch-up and CVDR will be gradually replaced once the CBR assets are changed.

The HEVC transition is more complex, as introducing a new codec requires a full upgrade While there would be no impact on packaging, origin, CDN, DRM or SSAI, several significant changes would take place. For instance, we have observed an average of a 2x density difference between AVC and HEVC for ABR encoding, which indicates that additional CPU or server capacity is needed. On the client-side, the decoder needs to be HEVC capable. If it’s not, a hybrid manifest will have to be created with duplicated AVC and HEVC profiles. This means having to duplicate the encoding.

The HEVC migration, although disruptive in an appliance world, is actually very advantageous in a cloud deployment thanks to the inherent flexibility and agility that cloud deployments offer, whether in a public or private cloud. Harmonic has a broad set of products and a turnkey solution that leverages HEVC to help with bandwidth constraints.

Bandwidth is precious, and advanced compression technology is needed. Harmonic has been working on codecs like HEVC and AV1, as well as AI-based techniques used in our patented content-aware encoding
available on all Harmonic media processors, through a software license, and the VOS®360 Live Streaming Platform.

Harmonic has deployment experience helping customers transition from AVC CBR to AVC CAE and even to HEVC CAE. Are you ready to boost your bandwidth savings and optimize your video delivery? Contact us today to start a discussion.